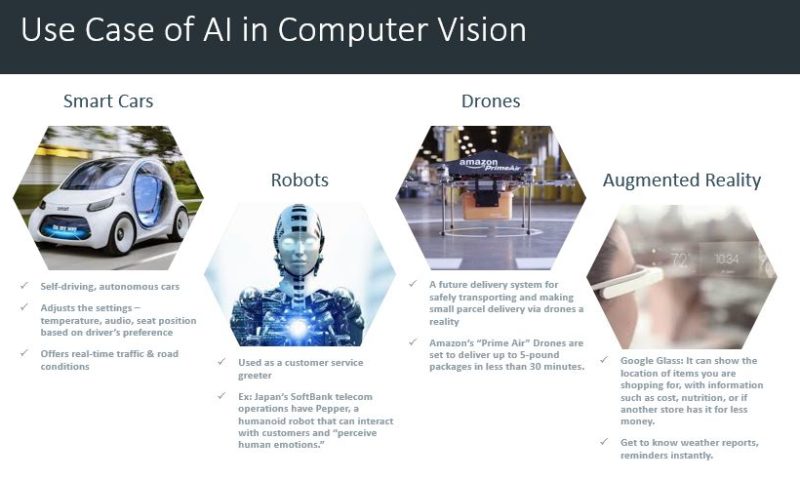 It appears as if the movie – Terminator – was released quite recently and many of us have talked about if machines could help us in our daily chore activities and supporting business operations.

Fast forward! We’re already realizing few changes around us where artificial intelligence enabled systems help us in many ways and the potential of it looks bright few years down the road.

I was researching about few top use cases of AI in business a couple of weeks. I thought to share it here and I’m sure you’re going to be excited to read & share. 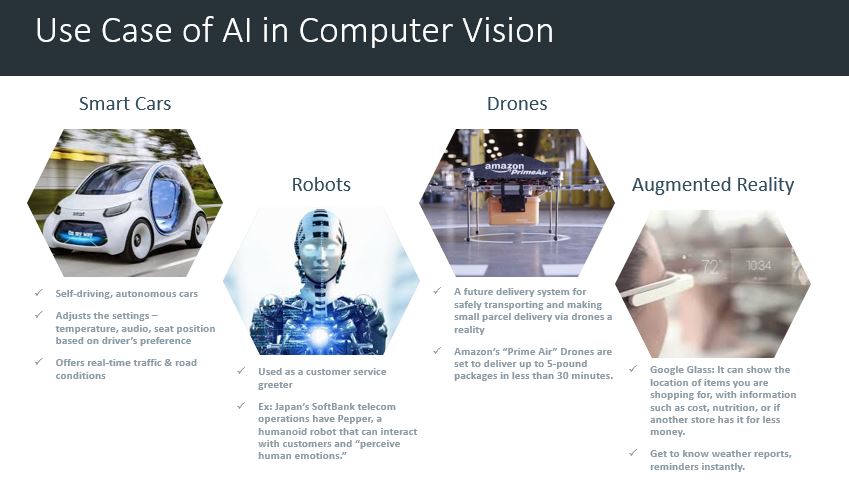 1. Computer Vision – Smart Cars (Autonomous Cars): IBM survey results say 74% expected that we would see smart cars on the road by 2025. It might adjust the internal settings — temperature, audio, seat position, etc. — automatically based on the driver, report and even fix problems itself, drive itself, and offer real time advice about traffic and road conditions.

2. Robotics: In 2010, Japan’s SoftBank telecom operations partnered with French robotic manufacturer Aldebaran to develop Pepper, a humanoid robot that can interact with customers and “perceive human emotions.” Pepper is already popular in Japan, where it’s used as a customer service greeter and representative in 140 SoftBank mobile stores.

3. Amazon Drones: In July 2016, Amazon announced its partnership with the UK government in making small parcel delivery via drones a reality. The company is working with aviation agencies around the world to figure out how to implement its technology within the regulations set forth by said agencies. Amazon’s “Prime Air” is described as a future delivery system for safely transporting and delivering up to 5-pound packages in less than 30 minutes.

4. Augmented Reality: Ex: Google Glass: It can show the location of items you are shopping for, with information such as cost, nutrition, or if another store has it for less money. Being AI it will understand that you’re likely to ask for the weather at a certain time, or want reminders about meetings so it will simply “pop up” unobtrusively. 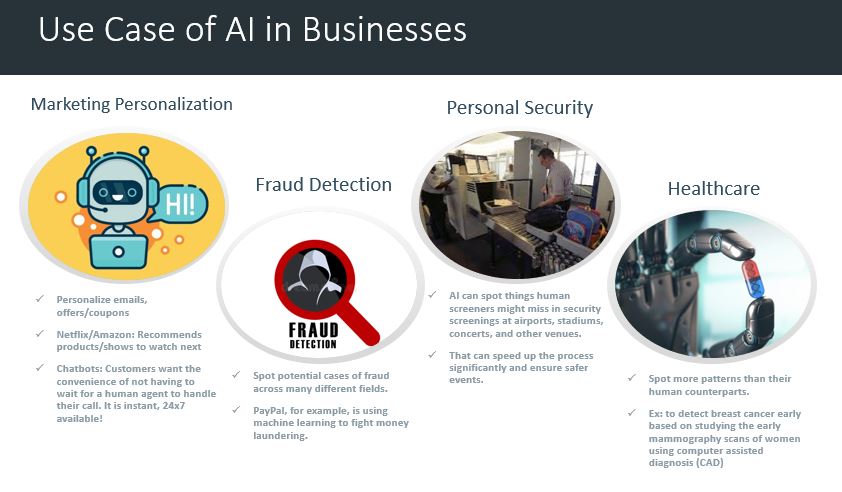 5. Marketing Personalization: Companies can personalize which emails a customer receives, which direct mailings or coupons, which offers they see, which products show up as “recommended” and so on, all designed to lead the consumer more reliably towards a sale. You’re probably familiar with this use if you use services like Amazon or Netflix. Intelligent machine learning algorithms analyze your activity and compare it to the millions of other users to determine what you might like to buy or binge watch next.

6. Chatbots: Customers want the convenience of not having to wait for a human agent to handle their call, or wait for a few hours to be replied to an email/twitter query. Chatbots are instant, 24×7 available & backed by robust AI offering Contextually relevant personalized conversation.

7. Fraud Detection: Machine learning is getting better and better at spotting potential cases of fraud across many different fields. PayPal, for example, is using machine learning to fight money laundering.

8. Personal Security: Airports – AI can spot things human screeners might miss in security screenings at airports, stadiums, concerts, and other venues. That can speed up the process significantly and ensure safer events.

9. Healthcare: Machine learning algorithms can process more information and spot more patterns than their human counterparts. One study used computer assisted diagnosis (CAD) when to review the early mammography scans of women who later developed breast cancer, and the computer spotted 52% of the cancers as much as a year before the women were officially diagnosed.